First of all, let me say that this blog post has been the hardest of them all.  I’ve been avoiding writing this one because it’s difficult to think about how hopeful we were only to face more heartbreak.  I will also admit I haven’t reread this post for typos or grammatical errors.  I can’t.  So I apologize in advance for anyone who is a member of the grammar police.

With the last transfer unsuccessful, we scheduled the next one as soon as my cycle started.  The medications started in June and the transfer was early July. During the lining check, the doctor usually looks at the number of embryos remaining and we discuss how many embryos to transfer.  This time, my lining check was done by my fertility doctor’s partner so when the topic of how many embryos to transfer, he was reluctant to agree to the 3 I requested. I argued that with my advanced age, the lower grading of the remaining embryos and the lack of success thus far should be in my favor.  He eventually agreed and signed off on the request.

This time we did not do acupuncture so it was basically, come in, get my transfer done and leave.  This time to comfort me through the awkward parts of being in stirrups with a room full of people, I brought my own blanket.  I racked my brain trying to figure out how I could make that process more bearable and bringing a fluffy, comfy blanket was the only thing I could come up with (although, I don’t think the staff was impressed).

They transferred the 3 embryos, I went and relieved my bladder (another close call) and we left to wait out the 10 days for the pregnancy test.  As always, I didn’t wait the 10 days before taking a home test. There was an immediate change. I was pregnant. I called Andrew at work (cruel, I know, but I couldn’t hold it in) and while I was on the phone, I texted him a pic of the test.  I remember exactly what he said: “Damn you, Dana. How in the hell am I supposed to work now?” But I could tell he was smiling.

When he got home, we had a long talk about not getting too excited and not telling everybody – only family and friends who are close to us.  Telling people you had a miscarriage after telling sharing the excitement of a pregnancy makes a horrible situation worse. So, we took it day by day and celebrating each week that passed.

The blood test confirmed what we already knew.  My Hcg level was in the 300’s (it needs to be over 20).  Because we transferred 3 embryos, my mind immediately started thinking about multiples (I reminded myself of something I read about the Hcg levels are necessarily indicative of multiples or health of the pregnancy which kept my wandering thoughts in check).  My 2nd test was 1400 which meant I was definitely, without a doubt pregnant.

I started to feel nauseous but I never threw up.  The oral aversion set in pretty hard. Andrew grew kinda frustrated over my pickiness (but remained super patient with me).  I became exhausted all the time. I think I slept 10-12 hours a day (not all at once – my body is too old to lay in bed that long).  And the constipation was terrible. I won’t go into details but it was no joke.

Each week that passed, we became more excited but we kept our excitement in check.  We had been through enough disappointments to know things can change in an instant.

Around week 6, I had a bleeding scare.  It was a Monday. I was supposed to report to jury duty.  I woke up and went to the bathroom and there it was. Blood.  I sat there on the toilet and cried and cried. My crying woke Andrew and he came over.  No words were said. He just hugged me.

Needless to say, I didn’t go to jury duty (even though I had visions of the cops coming to bang on my door to arrest me which I know logically is ridiculous).  I thought about going to the ER but I knew I was too early for them to care. So, we waited until my fertility clinic opened to see what to do. By the time 8:30am rolled around, the bleeding had slowed which gave me some hope that it was not as bad as a miscarriage.

My coordinator was very gentle and reassured me that it could be anything and may not be a miscarriage.  She said she would talk to the doctor and call me back. While we waited, we hung out on the couch consoling each other.  I don’t remember what we watched but if I had to bet, it was probably my favorite show, Law and Order. When the coordinator called, she stated that it was probably too early to see anything but that Dr. Goud was willing to have us come in for an ultrasound that afternoon.

We arrived to the clinic dreading what we were going to find.  The bleeding had stopped but we had been through this too many times to be optimistic.  When the doctor pulled up the ultrasound, we saw not one but two sacks. The doctor got measurements of both and confirmed what we were seeing – there were 2 sacs with 2 healthy sized yolks.  We went into the appointment very downhearted and left completely elated.

We had a phone appointment with the nurse at our regular OBGyn office to get our information with our pregnancy.  Even though the lady was kinda annoying, it was exciting to be almost graduating from the fertility clinic and moving on to my OBGyn.  We scheduled my first ultrasound for around 9 weeks.

I was 8 weeks when we had the last ultrasound at the fertility clinic.  We were able to see and hear a very healthy heartbeat of one fetus. That’s right, only one.  We were extremely disappointed that only one made it but we remained super grateful that, so far, everything looked healthy with the one still there.  The time we’d gotten this far 3 years before, the fetus measured small so it was reassuring our little peanut was a healthy size. 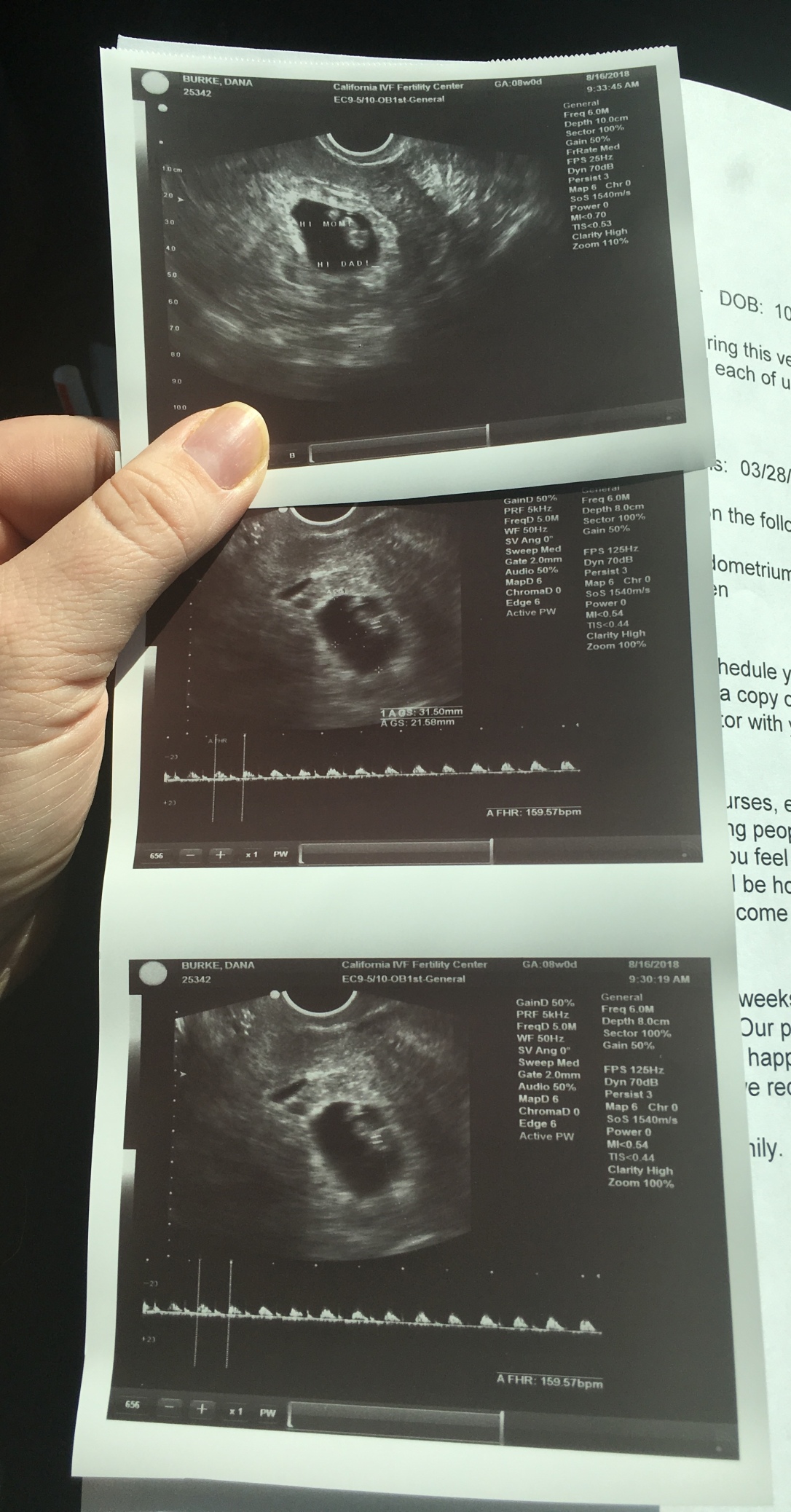 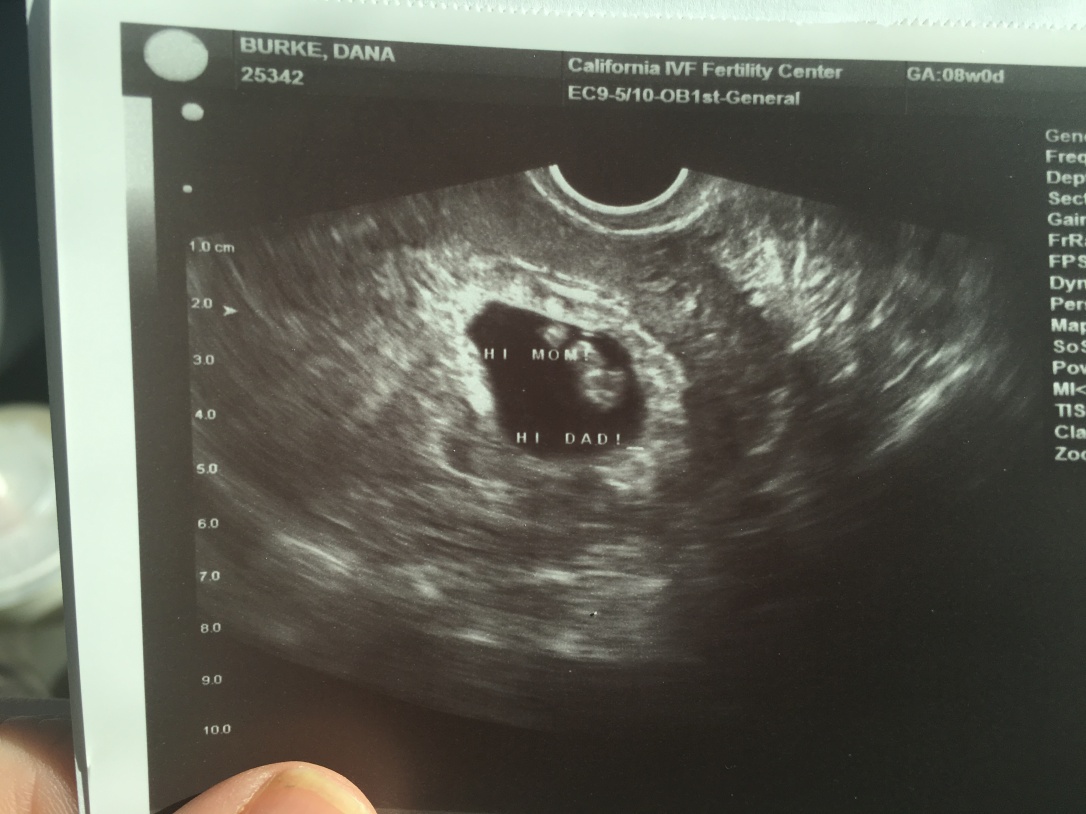 When we came out of the room, the staff at the clinic had lined up to give us hugs and a gift.  It was super sweet and I was so thankful for all their support. We had graduated. On our way home, a friend of mine shared a statistic that among women with recurrent miscarriages, pregnancies where a heartbeat was seen at 8 weeks, 98% continued.  We both cried. For the first time, we became a little more comfortable with the idea that this may end

Four days later, I had more bleeding.  I tried to reassure myself that it was only spotting and women experience this all the time and end up carrying to full term.  I called my OBGyn’s office and asked to schedule an appointment sooner than my original first appointment. They were able to schedule something the next day.

I explained the situation and my history thus far with this pregnancy to the doctor.  I showed him the ultrasounds from the fertility clinic and he suggested repeating the ultrasound.  During the ultrasound, we saw the fetus. She looked like a kidney bean. And that’s when he said it: “I don’t see a heartbeat.”

He called in a colleague to verify the findings.  She, too, saw no heartbeat.

The extra doctor and the nurse left the room.  My doctor sat there patiently while Andrew and I grieved.  The sadness was suffocating.

He explained that we could schedule a D&C or we could wait for my body to pass the pregnancy tissue.  It was my choice and I didn’t have to let him know right then.

I don’t remember leaving the office or driving home.  But, we made it there somehow. I texted the few family and friends that knew.  “I lost the baby. No heartbeat. I don’t want to talk right now.”

They were able to schedule the D&C in 2 days.  I would have to continue the progesterone shots and estrogen patches to hopefully prevent my body from starting the process of expelling the pregnancy.  I remember the shot that night was rough. I sobbed. Not because it hurt (Andrew has gotten really good at giving them) but because the futility of the process.

When we arrived for the D&C, I couldn’t walk into  more than waiting room where you checked in. I just froze in the lobby and began to cry.  A staff member saw us and ushered us through the back to the procedure area. They started an IV and went over the same questions about my history.  They told us they would do another ultrasound before the procedure to confirm the fetus had no heartbeat.

When I was transferred to the procedure room, the IV went bad somehow and they restarted it on the soft part of my forearm (anyone who has an IV here knows that that spot hurts more than normal).  But, they quickly sedated me and I was out.

I found out later that after Andrew went into the waiting room, it took everything he had not to bust through the doors and stop everything.  The only thing that kept him from doing it was that they told us they would confirm the no heartbeat before starting the procedure.

We got the results of the testing done on the pregnancy tissue.  It was a baby girl and she had Turner’s Syndrome. While I know she would’ve had medical issues, it didn’t make me grieve any less.  Girls with Turner’s Syndrome can often have very normal lives and no matter what her life would bring, she was my baby.

We didn’t really celebrate my birthday.  We didn’t have a Thanksgiving. And we didn’t decorate a tree for Christmas.  We didn’t feel like celebrating anything. For me, I am just tired of celebrating events without children.

Published by Dana and Andrew Burke

View all posts by Dana and Andrew Burke

Please feel free to ask us any questions or contact us with well-wishes.